On February 15th we will demonstrate against the Nazi march – and we will do everything we can to prevent it!

There will be a feminist block that starts from the main train station and will run right at the front of the demo train. According to the current status, the demo will start at 12 p.m. Half an hour before the demo begins (around 11:30 a.m.) there will be a delegates meeting with the latest information. Tasks can also be distributed there, e.g. for holding the front and side banners. If you have music requests, take them with you on a USB stick – and we’ll see what we can do abput it. We are happy about everyone who takes transpis and posters to engage with the block.

In addition to the feminist block and the demo train from the main train station, there is another demo train. This starts at 11 a.m. at the Alaunpark in Neustadt. There will be a climate block from Fridays for Future, Ende Gelände and Extinction Rebellion.

At the Infoküfa on February 12th at 7 p.m. in AZ Conni there is the opportunity to exchange current information again. There will also be a brief look at the action card together.

Here is the preliminary action card with the demo starting points and routes for February 15th: 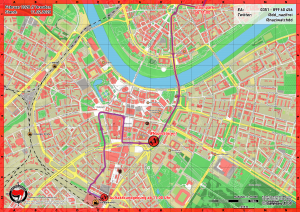